Getting started securing secrets in AWS Lambda is confusing at best and downright frightening at worst. You are faced with understanding and comparing KMS, Parameter Store, Secrets Manager, and Secure Environment Variables. You need to consider whether you are going to be retrieving secrets at run time, deploy time or a hybrid. And when you do retrieve the secrets you also are faced with deciding on whether to retrieve them decrypted or encrypted for later manual decryption.

With so many options, it’s way too easy to get this wrong. To make matters worse, there are many solutions, plugins, blogs, and resources out there that conflict in their recommendations. In this post we’ll look at some common sense security goals, the options available to the Lambda developer using the Serverless Framework, and how these options stack up to the security goals.

When developing an application, whether it is serverless or not, eventually you are confronted with how to deal with secrets that are needed for your application to run but you don’t want exposed to anyone else. These are things like API keys or database credentials. Common solutions to secret management are:

The requirement for secret management will vary based on application to application. For the purposes of this analysis I’ll be looking at the following functional and non-functional requirements:

Keep in mind, that this is not an exhaustive list! Certainly, other things like PCI compliance, principle of least privilege, auditable history, and performance impacts could be applicable for your application.

AWS provides three services for serverless secret management: Lambda itself via Environment Variables, System Manager Parameter Store, and Secrets Manager. All three of these are built upon the AWS Key Management Service (KMS). Let’s start by looking at KMS.

A common misconception is that KMS can store your arbitrary secrets. This is NOT what KMS does. KMS primarily does two things:

Note that important difference, KMS stores encryption keys, not the secrets themselves. This is why KMS is the common foundation to other AWS based secret management solutions.

The encryption keys stored in KMS really are designed to be accessible by nobody. The encryption keys live in a FIPS 140-2 Hardware Security Module (HSM). They have external audits by the NIST Cryptographic Module Verification Program. There is Ethan Hunt proof physical security that will zero out all keys if the pick-resistant locks are broken into. The encrypted secrets all utilize the AES-256 algorithm that would take all of the computing power on earth more time than the age of the universe to brute force crack1. 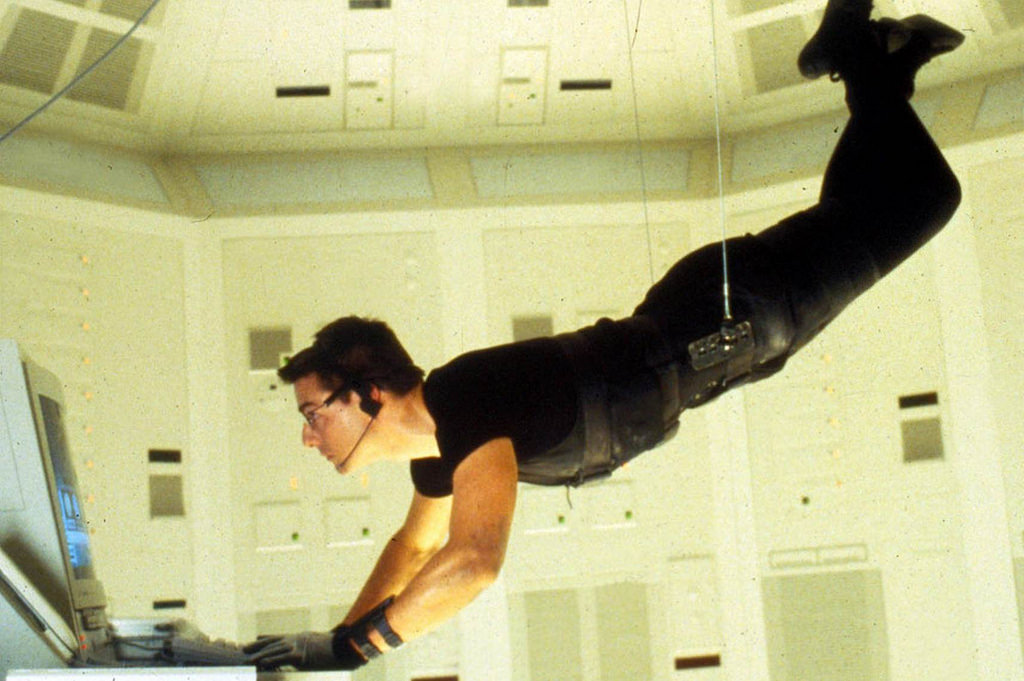 The security in KMS is appropriately intense as it really is a foundational component in the AWS security story with integrations across more than 40 other AWS services.

How Secret Management Solutions use KMS

As far as the options for secret management, each will eventually invoke the KMS APIs to do the same two things2:

In addition, all communication with KMS is fully encrypted in transit. The security risks in serverless secret management aren’t going to be with KMS directly, they are going to be how the secrets are managed when they have been decrypted as part of the deployment or runtime process. Let’s look at how Lambda, Parameter Store, and Secrets Manager can be used and misused for secret management.

Lambda provides out-of-the-box functionality for specifying Environment Variables at deploy time that become available to the Lambda at invocation. Lambda environment variables are always encrypted via KMS while at rest within the AWS data centers. However, there is gap: There is no out-of-the-box way to ensure the secrets are encrypted while in transit during deployment of the Lambda function.

This is a common scenario where the secret is stored in the “secure environment variable” section of the CI provider or the developer machine. At serverless deploy time Serverless Framework will retrieve the secret via ${env:SECRETKEY} and then inject that secret into the Environment section of the auto-generated CloudFormation template used for ultimately deploying the Lambda. That right there is already has some reason for concern.

It is possible to deploy Lambdas by other means besides CloudFormation, either by invoking the Lambda APIs or using the Lambda UI in the AWS Console. However, these alternative forms of Lambda deployment are also not recommended with plain text secrets as explained by these AWS docs:

AWS isn’t making any promises that it keeps the environment variables secure at deploy time no matter which deployment method is used.

As noted in the excerpt from the AWS docs above, Lambda does make a suggestion on how to store secrets: Encrypt them before putting them in the Environment Variables. From within the Lambda UI in the AWS Console, there are even helpers to encrypt the secret using KMS so the environment variable stores encrypted ciphertext. 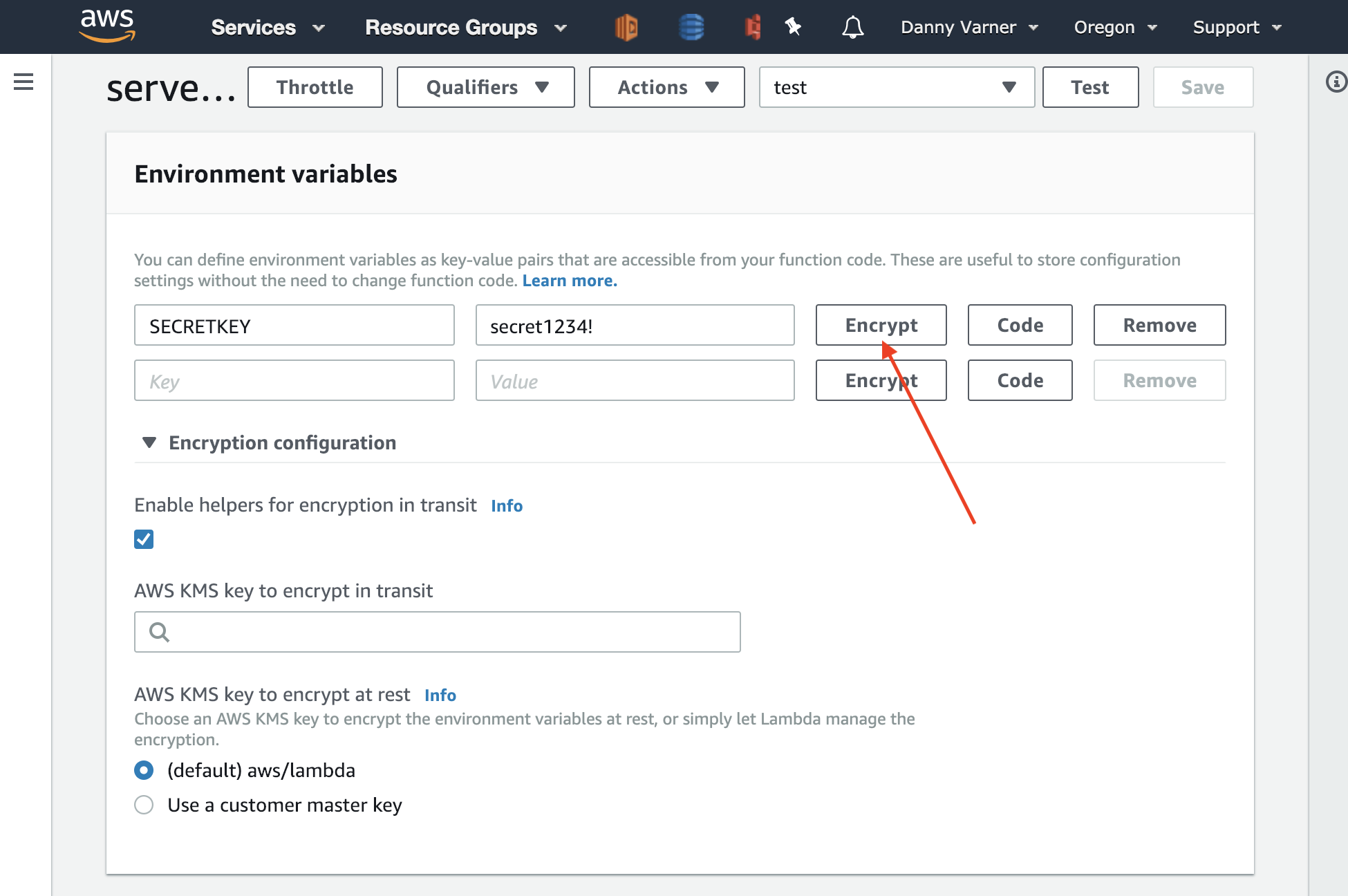 The helpers then provides an autogenerated code snippet that can be copy/pasted into the application to decrypt the secret at run time. 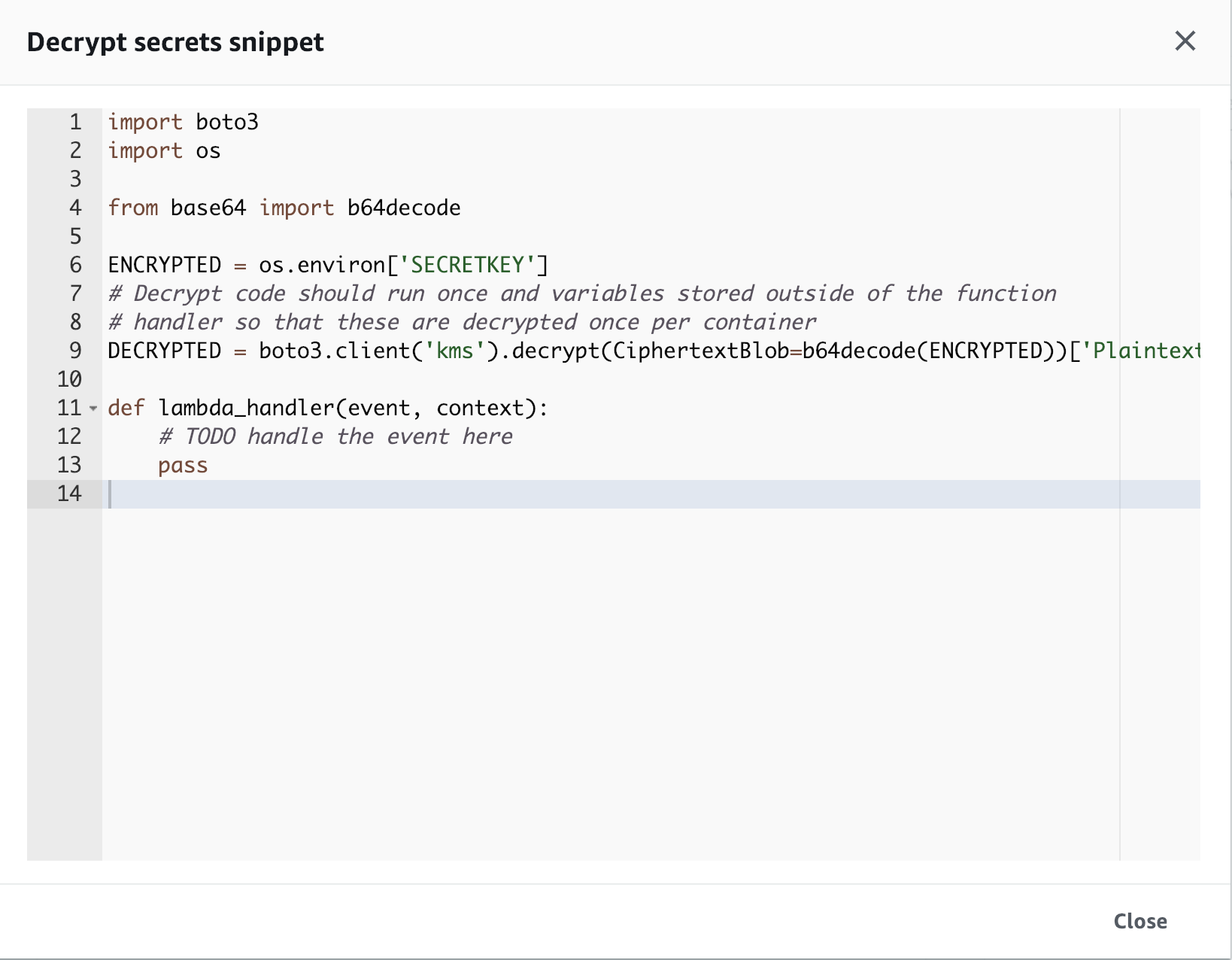 Although it’s not practical to be using the Lambda UI for any sizable project for secret storage, it is possible to do the same approach in Serverless Framework by doing the KMS encryption manually and then store the ciphertext in the Environment Variables.

Although this meets all the security requirements, it does lacks in usability. It can be difficult for an authorized user to manage the plaintext of the secrets by needing to manually deal with KMS encryption/decryption each time the secret needs to be viewed or updated.

AWS Systems Manager (SSM) has a hidden gem of a service called Parameter Store. Within Parameter Store you can store hierarchical configuration data and secrets for your application. Each secret stored in Parameter Store is securely encrypted using KMS and can then be selectively shared with other AWS resources via IAM policies and APIs. The service handles all the KMS operations for you so you never have to deal with ciphertext directly but can just reference the hierarchical path of the secret.

Parameter Store has other nice benefits like providing a very useful history view showing all previous values, when the value was modified, and by whom. And to top it off, Parameter Store is free to use. 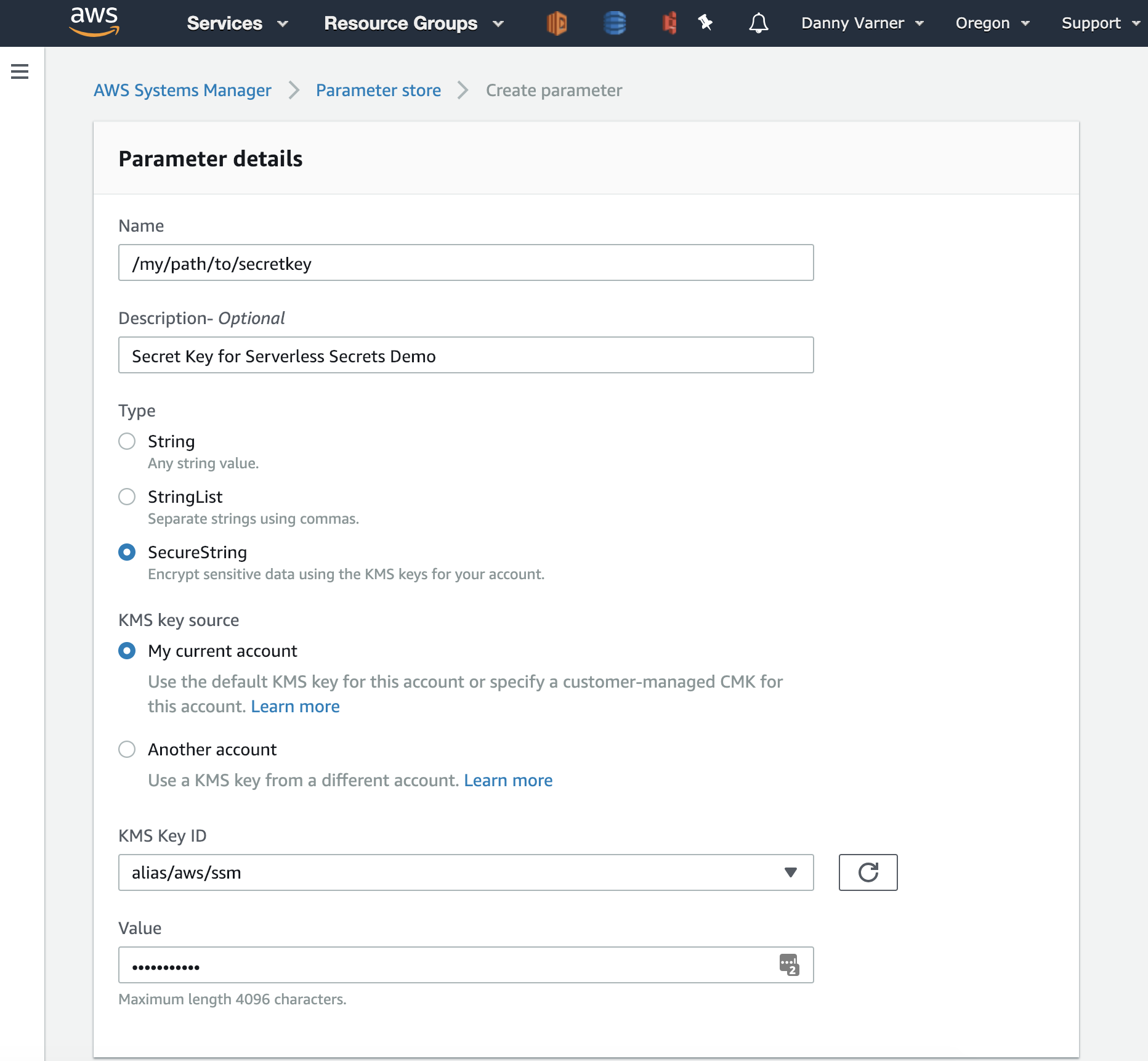 It’s a great way to store secrets but there are many ways to get it wrong when using in a Serverless context.

Serverless Framework has built-in support for Referencing Variables using the SSM Parameter Store. To decrypt the values at deploy time specifying a ~true at the end of the key will get the plaintext value of the secret for deploying to Lambda. However, this is NOT recommended for the same reasons as stated in Environment Variables section. Since the secret is being decrypted at deploy time it is going to be shoved into CloudFormation in plaintext.

Unfortunately, this is a recommended way of storing secrets on the serverless blog.

This approach is similar to using using Environment Variables with Ciphertext Secrets talked about earlier. The benefit here is that you can utilize the Parameter Store to easily view/manage and update your secrets. In Serverless framework when specifying ~false at the end of the ssm key, or omitting the flag altogether, the secret will be retrieved from Parameter Store encrypted which will satisfy our encryption requirements.

As long as the Parameter Store was configured to use the same KMS key for encrypting the secrets, the Lambda should be able to decrypt the values at runtime.

This wouldn’t be too bad of an approach, but there is one obscure detail that makes this difficult. When encrypting something using KMS there is an optional argument that can be specified called “Encryption Context” that consists of arbitrary key/values. Parameter Store happens to internally call the KMS encrypt APIs using the Encryption Context of:

Although this is secure, the benefits of using Parameter Store in this way are offset by the complexity of passing in the custom encryption context.

This solution supports all the security requirements as the Lambda is never deployed with the raw secrets.

There is some complexity in the ease of use however with any run time retrieval of secrets that isn’t reflected in the sample code above. Should the secret be stored in the global scope to minimize API calls/latency when the Lambda is warm? If so, how to invalidate the cached secret when it changes?

There is another nice feature about Parameter Store in that it is possible to call the get_parameters (note the plural) API to get multiple configuration values/secrets in one API call based on the hierarchical Parameter Store path. This can be useful in optimizing for cold boots.

There are some downsides to Secrets Manager:

Secrets Manager is a relatively new service, so there may be new functionality to leverage as time goes on.

Although it may seem like using a secret management service at run time may seem like the best option at first, there are a number of other complications to consider with run time solutions:

These concerns are less of a problem for deploy time solutions as they can be validated through a CI/CD pipeline before going live.

The ecosystem of secret management solutions for Lambda suffers from too many options that don’t all provide a very strong security story. It takes some careful consideration of the security goals specific to your application. For deploy time secret retrieval, Lambda Environment Variables with ciphertext via KMS is a solid option. For run time secret retrieval, SSM Parameter Store and Secrets Manager will both do the job with the former perhaps being a bit better suited for Lambda at this time.

What do you use for Secrets Management? What other considerations are there?