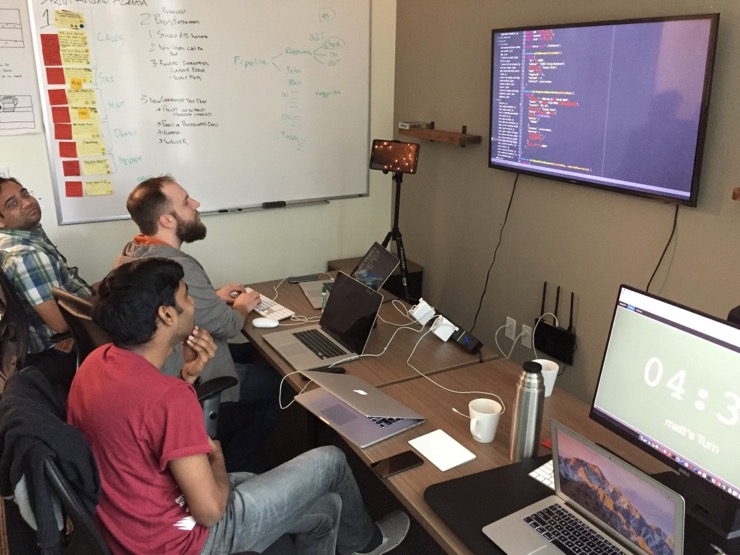 About two months ago our team jumped from doing all work individually in a scrum team to mob programming in a scrum team. Now, I broke the ‘rules’ here a bit. From what I’ve read, general recommendation is to gradually introduce mob programming to a team by doing sessions for a couple hours each week. We didn’t do this. We tried it for 8hrs one day, liked it, and as Kent Beck says ‘Turned Up the Good’ to making the de facto way of work for the last two months.

Mob Programming is where whole team works on the same thing, at the same time, in the same space, and at the same computer. It is pair programming, super sized. It is not immediately intuitive in how it could make sense from a cost and efficiency perspective. But after trying it, the results are surprising. We are delivering positive outcomes at higher than previous average sprint velocities, and are having a good time doing it. Here are some of the successes and challenges I’ve seen in our team working in a mob. I think it’s worth pointing out that with so many variables at play (team dynamics, corporate culture, domain of work, agile maturity, etc) the successes and challenges I’m sure will be unique to each team.

Here are some things I’ve noticed.

One of the most satisfying pieces of mob programming I’ve seen is how much simpler the final designs are that get merged into our master branch. Many a times in code review have I seen the comment “This widget could be refactored in this way to provide this benefit.. but it’s OK how it is, we can do it later”. And then the code gets merged, the comment is lost for ever, the refactor never happens and there continues to be a sore spot in that component whenever someone works on it. Rather than wait for feedback in code review on how a design might be better and risk not being able to implement it due to the higher cost of rework, the design gets simplified on the fly through all the unique and brilliant people on the team at the earliest possible moment.

“Simple can be harder than complex: You have to work hard to get your thinking clean to make it simple. But it’s worth it in the end because once you get there, you can move mountains.” – Steve Jobs

In Lean manufacturing inventory is a form of waste as it is not yet providing any value. By maximizing the single piece flow of getting a work item from idea to a state where it is done and it’s value can be quantified the system health improves. In addition to the simpler design (less code, less tests, less opportunity for defects) that contribute to a reduced cycle time, we also see a reduction in what Woody Zuill calls the Question Queue Time: “The amount of time that we must wait before we get an answer to a question that is blocking us”. Chances are someone in the mob knows the answer and progress can march on.

In traditional software development when a blocker arises there is usually a context switch to another work item until the blocker goes away (response in email, next standup meeting, etc). The effect of this though is just an increase in inventory. Woody says it beautifully in his Mob Programming book:

“In other words, we’ve HIDDEN the queuing problem by masking it with an inventory problem”. –Woody

Happy teams are productive teams. The energy of all the team solving a problem together, learning together, and deploying together has been really positive. We recently had some travel that broke up the mob for a short time and we all came back together missing it and feeling its absence. I do believe we all are more creative, engaged and committed to maximizing value for the business when the team is gelling and happiness abounds. Mob programming I find fuels this team happiness.

We still have a ways to improve in how we can maximize the benefit of mob programming for the business. Some of the challenges I’ve noticed are: